The territory of the region is 141,1 thousand square kilometers (0,8% of the territory of the Russian Federation), 47,6 per cent of which is agricultural land, 33,1% – forests, 16,4% – water bodies, including swamps, 2,9% - other lands. The territory of Omsk region includes 6 towns, 32 districts, 21 working settlements, 1477 rural settlements. Omsk region stretches from North to South for more than 600 km, from West to East – 300 km. Omsk region borders with Tyumen region in the West and North, with Tomsk and Novosibirsk regions in the East and with the Republic of Kazakhstan in the South. The distance from Omsk city to the city of Moscow is 2555 km. Omsk Irtysh riverside territory is located in the fifth time zone, time difference with Moscow is 3 hours.

Omsk region has a well-developed network of transport communications. Along the 55th parallel of North latitude in the region the Trans-Siberian Railway is running, connecting the Western and Eastern parts of the country. Also the territory of the region is crossed by highways connecting North Russia with Kazakhstan and Central Asian countries. 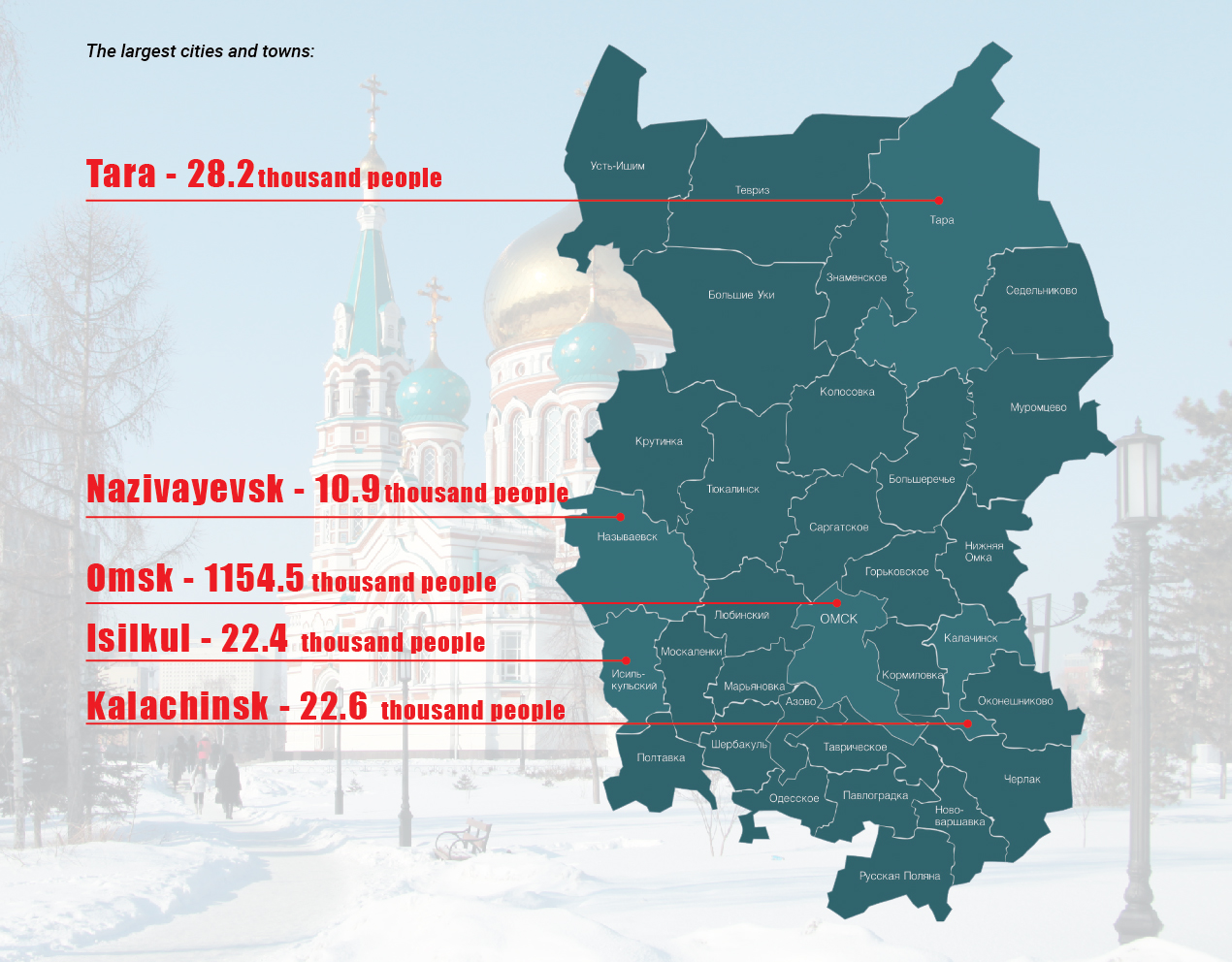 Omsk region is characterized by high concentration of population in the city with a million plus population, which opens up opportunities for the development of consumer market and reduces the costs of infrastructure maintenance.

National composition of the population of Omsk Irtysh area is represented with more than 122 nationalities and 12 ethnic groups.

The region has the reserves of:

The main natural resources of Omsk region are soil resources, enabling the development of large grain farming and all types of livestock farming. The region is situated in several natural complexes: taiga, small-leaved forests, northern and southern forest-steppes and steppes. In the forest area is dominated with birch and aspen, softwood – pine, fir, spruce and cedar. The area has more than 4 thousand rivers and 16 thousand lakes.

Over ten water bodies in the region have the status of natural monuments, among them the lakes Uldzhay and Ebeity – relict saline lakes with halophytes and large reserves of therapeutic sulfide mud.